The new Microsoft browser is one that is full of potential, and yet a year and a half after its release next to Windows 10, there are still many things we miss in it, specifically the extensions. In March we saw the first version of Microsoft Edge with support for its first extensions, but if we look at the Windows store these days, growth has been minimal in that category. 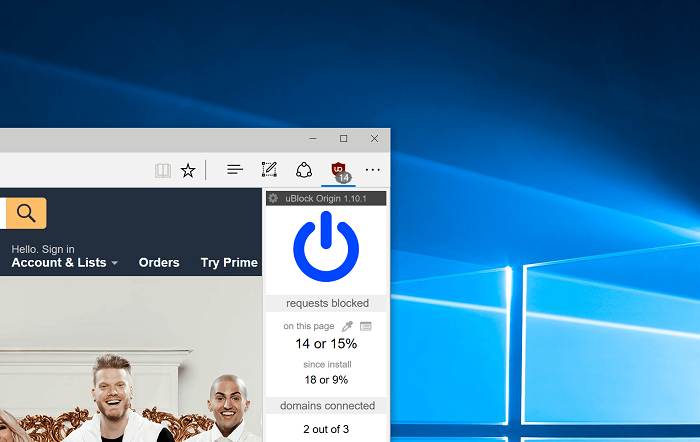 Today, one of the most popular tools of the moment to block all type of unwanted content when surfing the web, uBlock Origin, lands for the first time in Microsoft Edge in preliminary version. Not only will Chrome and Firefox users be able to use it.

UBlock Origin has never sold itself as an ad blocker in the style of AdBlock Plus. It is a “broad spectrum” blocker whose main objective is to reduce resource consumption and improve browser performance.

Although by default it is programmed to block ads, crawlers and sites containing malware, the user can disable it in a single click wherever he wants, or add specific sites to a white list. UBlock Origin does not sell advertising as paradoxically does AdBlock Plus, and does not make the navigation heavier but lighter, for something it has won so many users.

The installation is extremely simple, simply getting the app from the Microsoft store. And once you open Edge you will be informed that you have a new extension and you will be asked if you want to activate it. If you want to have a uBlock button always visible next to the address bar, you must click on the icon and select that option.

Microsoft Edge not only does not increase its users but loses them, the shortage of extensions that there is in other browsers, certainly plays a role in this. Although more and more interesting options appear like this in the Windows store, the speed at which they arrive is quite slow. Hopefully this will change sooner rather than later.