A beautiful mansion in Gloucestershire.

Snowshill is a traditional Cotswold Manor, made of local Cotswold stone located in the beautiful village of the same name just along from the village of Broadway.

Throughout its history, the Manor has undergone a series of architectural changes. The main part of Snowshill dates back to c.1500, where it would have been a traditional medieval house with a great hall. There are two surviving remnants of this early period. The first, being the large chimneybreast on the East front, and the second surviving sign is the ceilings of Ann’s Room and Seraphim (Mr Wade names each of the rooms). 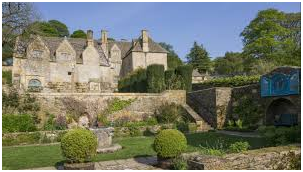 The next important date is c.1600 when large-scale architectural change occurred. The great hall was divided both horizontally and vertically, essentially creating a long building of two storeys with large attics above and stone gables at each end (the one at the North still exists). The mullioned windows of Cotswold stone also date from this first alteration. The next significant date in Snowshill’s architectural history is 1720. This was during the ownership of the Manor by William Sambach, who decided he wanted to alter the orientation of the house. This was achieved by adding one room in the Southwest corner on each level and creating a new front door.

If you are looking to add rooms onto your house or looking for loft conversions Bristol it is worth taking a look at http://www.caineslofts.co.uk/ who, unlike the companies who built some of the additions at Snowshill take into account your needs and the pre-existing style of the house. As it was the additions onto the manor were not built of Cotswold stone and so contrast with the earlier style. The building materials were of yellow-coloured stone and sash windows. The new rooms were fitted with softwood panelling and small iron fire grates. The Green room and Grey room also had these features added (and they can still be seen today).

The introduction of window tax in 19th Century meant that several of the windows on the East side were blocked up. After this time the house underwent no further alterations until Charles Wade extensively rebuilt the Manor after he purchased it in a virtually derelict state.

Wade took away the plaster ceilings from most of the rooms, unblocked the fireplaces and fitted contemporary oak panels to many of the room’s walls. This is how the Manor has remained until the present day.

Visitors today can see the vast array of items that Mr Wade collected and housed in the mansion. There are over 20 suits of Japanese Samurai armour, hundreds of clocks (all set to different times), bicycles and children’s prams and strollers from all social classes.