Beauty and that beautiful library

Growing up as a young child I was surrounded by books and Disney films. The two don’t necessarily go hand in hand but what they both had in common was the ability to transport me into another world. Whether that was a world filled with pirates and the boy who never grew up or the world of magical trees and eccentric inhabitants. As I grew up my love for books and the fantasy world only grew stronger. Each year I would acquire more and more books and therefore more and more bookcases.

There is one Disney film that remained a constant in my heart. Much because the key female character much like myself lived in a world of books. Beauty and Beast is a timeless classic that encapsulates true Disney essence first seen on our screens in 1991. A young female longing for a life much more than she currently has, a yearning for those around her to understand who she is so she finally fits in and a classic ending of love conquering all.

The film is based on a traditional French fairy-tale called La Belle et la Bête which was written by Gabrielle-Suzanne Barbot de Villeneuve and was published in 1740.

But what I became obsessed with, other than the amazing talking objects and the delectable Lumiere character was the library in the beast’s castle. Oh, how I dreamed of keeping books like that.

Anyway, back to those books. As Belle walks into the library she is met with a sight I could only dream of. Books from floor to ceiling on every wall around her. So large that winding staircases were needed to reach the upper levels. Almost too many books to be able to comprehend. 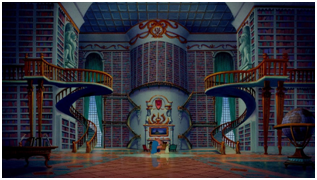 The mixture of the breath-taking castle, unimaginable number of books, the endearing characters of Lumiere, Cogsworth, Mrs Potts and Chip along with the loving and strangely intensely handsome beast, made this a film that I would return to over and over again. Whenever I need cheering up or just wanted to feel that warm fuzzy feeling that Disney is so incredible at creating I would reach for my copy of the film and play it over and over again.

This film became for a me “A tale as old as time, a song as old as rhyme” that beautiful Beauty and the Beast.