Rise of the machine

The Industrial Revolution changed human existence forever. It took place between the 18th and 19th centuries in Europe and America where mainly agricultural societies became urban and industrial. Before this time, most manufacturing was done in people’s homes using basic tools and machinery. After the revolution, manufacturing took off like never before with mass production. Industrialisation marked a change to powered, specialist machinery which could produce goods far quicker. The development of the steam engine and the iron and textile industries also played key roles in the revolution and enabled these mass produced goods to be transported far and wide.

Transportation also aided communication and banking, with society becoming more mobile, an increased variety of manufactured goods available and an improved standard of living for some. However, there were some pretty awful working conditions for many such as the poor and working class. Britain is said to have been the birthplace of the Industrial Revolution, in part thanks to the great deposits of coal and iron ore. It also helped that Britain was politically stable and a leading colonial power in the world. Raw materials could easily be sourced on the empire where ‘the sun never set’. They also had access to huge market places thanks to these colonies.

Due to the demand for goods, the need for mechanization became acute. In 1712, Thomas Newcomen developed the first steam engine and by the 1770’s, James Watt had improved on this work and the steam engine could then be used to power machinery, trains and ships. The Industrial Revolution also saw the first use of belt drives, one of the earliest power transmission systems. These flat belts conveyed power over large distances and were made from leather.  Demands changed as production levels grew and this spurred the development of new belt designs such as V belts made from rubber. For Gates v Belts, visit http://industrialbeltdrives.com/quote/v-belts/gates-micro-v/. 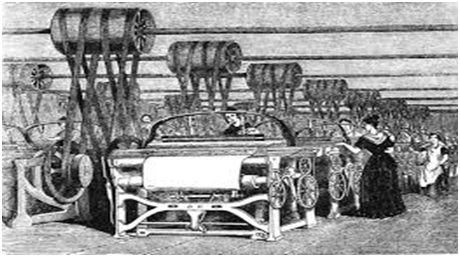 The middle and upper classes benefitted greatly from the Industrial Revolution but the working class didn’t do quite so well. Factory labourer’s wages were low and conditions were dull and often dangerous. Unskilled production workers were easily replaced and so job security was never guaranteed. Children were forced to work long hours and had to complete highly hazardous jobs like cleaning machinery! Many traditional craftspeople lost employment as their skills were replaced by machines.

Towns and cities grew at an incredible rate and conditions were unsanitary and crowded, as more and more workers migrated from the countryside to find work in factories. Things began to improve by the late 19th century with the introduction of labour reforms and the rights of workers to form trade unions. Industrialization spread throughout Europe, despite Britain’s efforts to contain their advantage. By the early 20th century, the United States had become the world’s leading industrial nation. Manufacturing and access to goods is something we take for granted nowadays but it’s only thanks to the seismic shift in human development that started in the 18th century.