This London Bridge Is Not Falling Down

If you want to see an example of outstanding engineering, you don’t have to look too far. A visit to Canary Wharf in London will reveal the city’s newest bridge and it’s movable! It looks like a simple design but the engineering behind it is quite complex. It is a 28m single leaf bridge that provides both a pedestrian and road link between Montgomery Square and Wood Wharf, the latest addition to Canary Wharf. 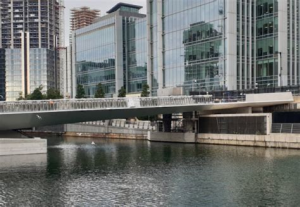 For the engineers, the project was a complex one. The bridge needed to be light enough to be able to move but strong enough to take the weight of pedestrians and vehicles. Steel was chosen for the deck instead of concrete as it requires significantly less power to raise.

The bridge was constructed in Belgium and had to make its journey by sea before arriving in London. It is a simple yet sleek design that fits in well with the surroundings. The bridge is raised using twin hydraulic cylinders positioned under the eastern part of the bridge. For information on Fluid Power, visit dana-sac.co.uk/fluid-power/

They will raise the bridge high enough to allow large vessels to pass underneath and when raised, the bridge will reveal its impressive steel construction and the mechanical wizardry that is busy working underneath to provide this vital infrastructure to one of the busiest cities on the planet.

The bridge was opened to the public in January 2020 and is one of six movable bridges in London but is the largest. The deck weighs 185 tonnes and positioning it was a delicate operation.