When the portcullis protected you and your belongings

There are lots of reasons not to attack a Castle. They are specifically designed to repel people that are outside. Sometimes though you don’t have a choice and needs must. If you’d asked Owain Glyndwr what his thoughts were on the matter, he’d have rolled his eyes and said, “there’s about 15 of them in Wales how long do you think that is going to take me taking those”. True to his word he took one look at Pembroke and decided not to bother. Saladin himself thought better of it with an attack on Krak des chevaliers. That only fell after the inhabitants got a forged letter telling them to surrender by their boss overseas. Up till then they had been besieged for 36 days. Castles are on hills, they have high walls they have moats they have murder holes and they have the Portcullis. The Portcullis was the main defence of many castles and kept all the owners valuables safe from attacking groups. Today we utilise cctv and burglar alarms for our homes and secure doors for our Garage Doors Bath way and the extensions that we have on our properties. Take a look at Garage Doors in Bath from Upandoverdoors to see the selection that you have available. 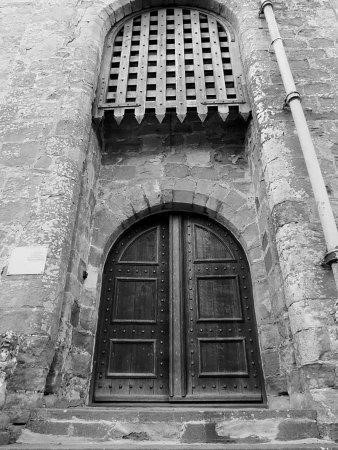 Lets say your castle is about to be breached. The attackers have managed to get up the hill and the front door is smashed in. Not to worry this is where you get to play your final card. The Portcullis is a huge grated gate that can be lowered or dropped down blocking the entrance. It is usually made from a good bit of solid oak and takes an age to bash through. Some castles had a solid iron one. Once it was on it’s way down nothing was going to stop it, the weight was quite intense. You can see one being operated here at Warwick Castle. Therefore, that hide draped battering ram or, in some unfortunate cases, human body was not going to stop that bad boy when it came down. What was a really clever feature was that the spikes it had on its base where lined up with holes in the floor and flagstones. When they come down and sink neatly in there is very little getting in or getting out. If the castle was lost it would certainly buy you some time so that you could escape.

One of the nastiest features of the castle and its portcullis was to lure you the attackers into the gate house. “Success! Huzzah!” the attackers would cry, and they would go steaming into the gap ready to cause as much havoc and slaughter as they could, especially if they’d been stuck outside for 36 days like at Krak de Chevaliers. But what is this? As the attackers reach the end a portcullis has dropped!  And one behind too, trapping them in the gate house. Suddenly above their heads wooden panels are removed and the smell of boiling oil or pitch fills the air. Down it is poured on the attackers as the Yeomen also launch wave after wave of arrows from their longbows. There are lots of reasons not to attack a Castle.