Perhaps a more text editor does not attract attention. Not even if it incorporates task management. But if it is QOwnNotes , which in addition to being an open source application picks up notes in plain text, incorporates Markdown support, works in sync with the ownCloud or Nextcloud notes application and is available for Windows, macOS and GNU / Linux, in addition to iOS and Android through third-party applications, things change.

Patrizio Bekerle, its creator, liked the idea of ​​having notes accessible in plain text files, as is done in the application of ownCloud notes, to gain freedom and not depend on closed platforms . However, he could not find a “decent” desktop application to take notes or a text editor that handled them well in tune with ownCloud or Nextcloud.

So he created QOwnNotes and made it available to everyone. 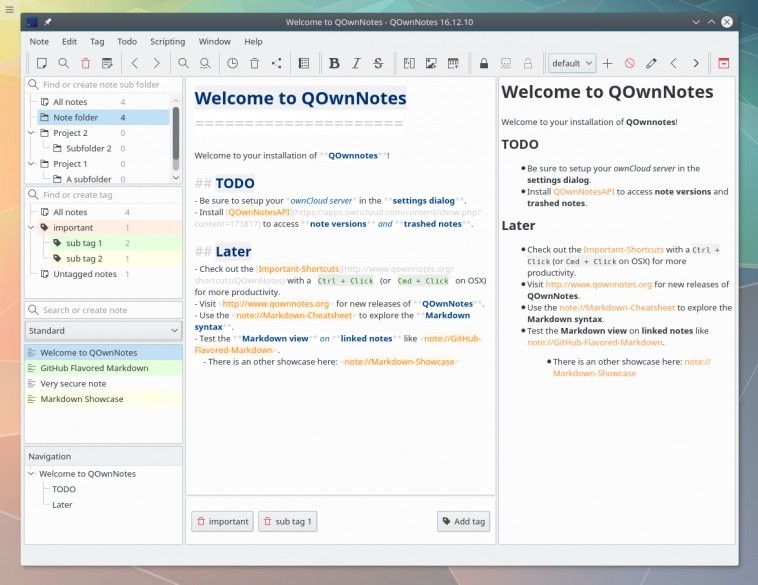 Great possibilities with all the information under our control

The application, as our title says, is extremely powerful . But perhaps versatility is the characteristic that most defines QOwnNotes. We create the text notes through the central editor that we can see in the program interface.

The user owns his writings at all times because all the notes are stored on his own computer as plain text files, although they can be enriched by formatting them, adding images, links, tables and other elements. Also, as we said, this text editor is compatible with Markdown, so we can use it for much more than just notes.

To this we can add the possibility of organizing the notes through folders and subfolders, creating at the same time links between them , so that the possibilities when creating structures is remarkably broad.

This text editor is compatible with Markdown, so we can use it for much more than just notes

QOwnNotes, as we said at the beginning, is also a task manager . It does not have the power of applications specialized in tasks , it is a fact, but it is interesting this function as an addition to the notes and thanks to the synchronization through Calendar Plus, a server compatible with CalDav or a self-hosted ownCloud calendar. Again, it is an interesting option for those who want to have all their information under control, on their hard drive.

It should be noted that the creation of Bekerle has many other minor characteristics , but no less important and noteworthy. For example, it incorporates a quite powerful note search engine with highlighting of the keywords, allows the customization of keyboard shortcuts, is compatible with scripts , has a history of changes in the notes, has a dark mode, we can import notes from Evernote and it is even able to solve certain mathematical operations, among other characteristics.

QOwnNotes is available for Windows, GNU / Linux and macOS . To access the notes in the cloud from a mobile device, we can make use of third-party applications such as MyOwnNotes for Android and CloudNotes for iOS .