The 15 richest characters in fiction

It is clear that, as in reality, even in the most complicated moments there are a series of characters in which it is seen as its wealth continues to increase. The magazine Forbes has wanted to publicize the names of the 15 richest fictional characters in a curious ranking.

To elaborate this list, the famous magazine has transferred the lives of the personages to the real life and thus to be able to determine, approximately, its wealth. Surprising that last year, these famous characters have seen their wealth increased by 20%, establishing the average net assets 9,700 million and together total stratospheric figure of 131,600 million dollars. 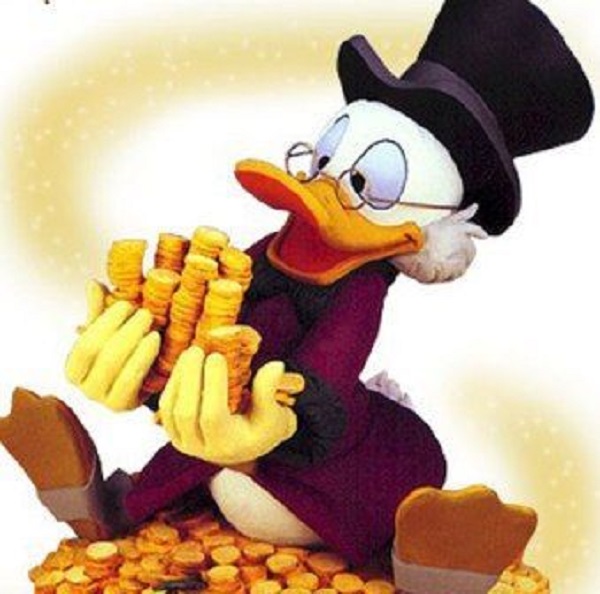 The list is headed by Uncle Scrooge, thanks to the revaluation of gold in recent times. Having a mountain of gold coins, the famous uncle of Jorgito, Juanito and Jaimito lead this classification. It is closely followed Carlisle Cullen, a character who has become famous thanks to novels and film Twilight.

The full ranking of the richest fictional characters would be…

2- Carlisle Cullen: His 370 years old and its various investments have made him amass a wealth of 25,300 million dollars.

3- Artemis Fowl II: The forger and thief protagonist novels Eoin Colfer has been done with the third position despite his youth with a total of 9,453 million dollars.

4- Richie Rich: The character played by Macaulay Culkin in movies, has continued to increase its assets in comics, so that amounts to 6,972 million dollars.

5- Jed Clampett: The character of the Rústicos Hillbillies series has become multimillionaire oil. In total, it has a capital of 6,652 million dollars.

6- Tony Stark: The inventor and star of Ironman stood at sixth place with 6,582 million dollars.

7- Smaug the Golden: The dragon of Middle – earth will debut in cinema with The Hobbit. While enjoying a wealth that reaches 6.022 million dollars.

8- Bruce Wayne: The name behind Batman obstenta one of the greatest riches of fiction thanks to the value of their shares of Wayne Enterprises. In total, 4.901 million dollars for the bat man.

9- Mr. Monopoly: The housing crisis has undermined their heritage, but nevertheless, still standing at the top of the richest characters. We will see to see if his next film does increase its 1.820 million dollars.

10- Arthur Bach: The billionaire New York crazy occupies the tenth position thanks to its 1,260 million dollars.

11- Jo Bennett: The manager of Dunder Mifflin on “The Office” is in this position thanks to its 840 million dollars.

12- C. Montgomery Burns: The owner of the Springfield Nuclear Power Plant continues amassing money. However, the nuclear crisis can deplete its capital which for now remains one of the biggest of fiction with 770 million dollars.

13- Chuck Bass: The young millionaire Gossip Girl is in this privileged ranking thanks to its real estate business that led him to have a capital of 770 million dollars.

14- Gordon Gekko: After trouble with the law, the character played by Michael Douglas reunites a great fortune that has led him to be one of the richest characters with 770 million dollars.

15- Jeffrey Lebowski: The Big Lebowski is done with the last position in this particular ranking with 700 million dollars.