The egg and our cardiovascular health: dismantling the most common myths

The relationship between egg consumption , cholesterol and cardiovascular health has been the subject of debate and research for many years, and still is.

Science has denied many myths about this issue, and recently has reviewed all the scientific literature in this regard to provide greater clarity. 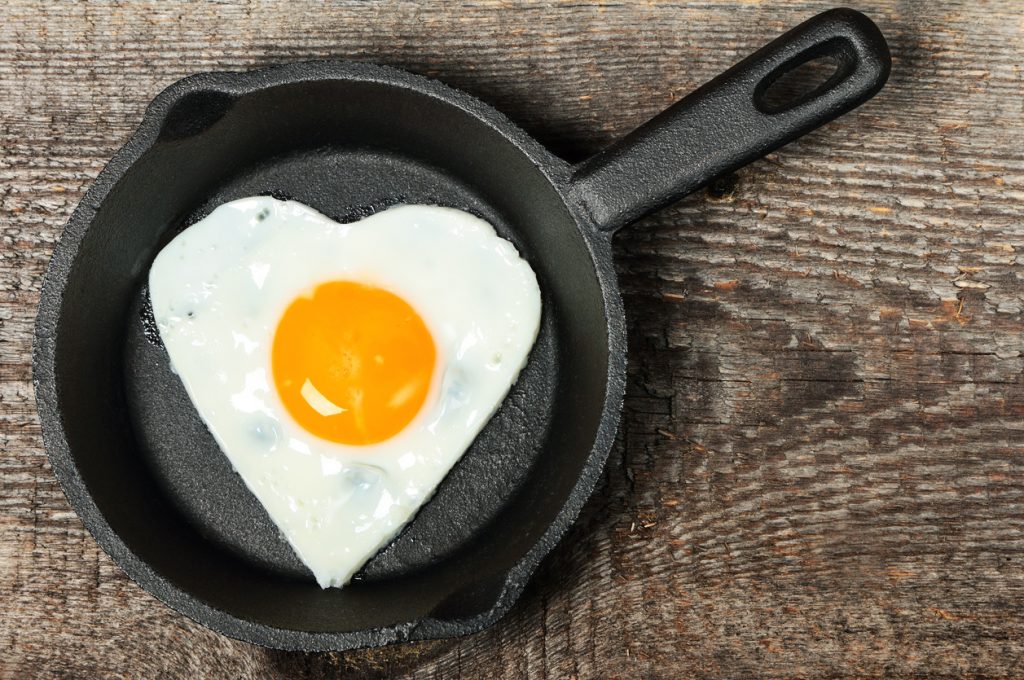 Eggs, cholesterol and cardiovascular health: recommendations that often have no evidence

The cardiovascular diseases accounted for 444 trillion dollars in health care expenses in 2010 and remain the leading cause of death in the United States.

Until recently, the reduction of cholesterol in the diet was part of the guidelines and guidelines on the lifestyle management of the American Heart Association and the American College of Cardiology, despite the inconclusive evidence to support the recommendation.

In turn, some organisms and associations recommend consuming less than 200 milligrams of cholesterol per day , and some of them less than 150.

It should be noted that the 2015-2020 dietary guidelines for Americans have eliminated the recommendation to limit cholesterol intake to no more than 300 milligrams per day .

However, the guidelines state that ” people should eat as little cholesterol as possible in the diet while eating a healthy eating pattern.”

Considering that eggs are a rich source of dietary cholesterol (which typically contains 141-234 milligrams per egg, depending on size), individuals at increased risk of cardiovascular disease who do not consume eggs are often advised.

In addition, according to the guidelines of the American Heart Association and the American College of Cardiology 2012, people with lower risk (low risk) of cardiovascular disease have been previously advised to avoid eggs due to high cholesterol content. in the diet.

The purpose of a recent review published this year in the journal Nutrition has been to summarize the documented health risks of egg consumption (if any) in individuals at low and high risk of cardiovascular disease and to determine whether the current recommendations ( as the ones mentioned above) are justified based on the available literature.

In addition, considering that insulin resistance places an individual at greater risk of developing cardiovascular disease and stroke , this review has described the effect of eggs on glucose metabolism.

The relationship between serum cholesterol and the risk of cardiovascular disease

Recent feeding studies of the subject in question have not always detected negative impacts of cholesterol consumption on the serum lipid profile, being the variability in the response to cholesterol in the diet between individualsprobably responsible for the discrepancies observed.

Researchers have used the term “hyperresponders” to describe people who experience an increase in both circulating LDL cholesterol and HDL cholesterol after consumption of dietary cholesterol.

Even so, it is essential to point out that 75% of the population seems to experience little or no alteration in the plasma concentration of cholesterol after the challenges of high cholesterol intake.

That is, approximately 75% of the population experience a moderate or no difference in plasma cholesterol after consumption of dietary cholesterol, describing this large percentage of people as “normal responders” or “hyporesponders” .

The potential mechanism that drives the “normal” or “hypo” response is a decrease in fractional cholesterol absorption and / or endogenous cholesterol synthesis, in response to increased cholesterol intake.

Therefore, researchers have questioned the reduction of dietary cholesterol as a strategy to reduce serum cholesterol for many years.

It has been suggested that dietary and lifestyle factors probably modulate lipid profiles in the blood to a greater extent, and therefore may present higher risks for cardiovascular health.

Since a single yolk typically contains between 141 and 234 milligrams of cholesterol , many dietary associations and approaches recommend no more than two or four egg yolks per week, respectively.

In the first investigations back in the 80s it was reported that the consumption of eggs was related to a greater consumption of cholesterol in the diet . However, no relationship was detected with serum cholesterol, mortality from all causes , coronary heart disease, myocardial infarction or angina.

These studies (their researchers) came to the conclusion that, instead of simply limiting egg consumption, the diet as a whole should be considered as a means to decrease the risk of cardiovascular disease.

It is important to note that a clear connection between egg consumption and increased risk of cardiovascular disease has not been established through adequate meta-analyzes.

In turn, when it has been shown that the increase of dietary cholesterol through egg ingestion raises circulating LDL cholesterol (remember that it is the cholesterol known as “bad”) in people classified as “hyperresponders”, they have detected minimal changes in the overall ratio of LDL to HDL cholesterol due to the proportional increase in HDL cholesterol (known as “good”).

That is to say, although such “hyperresponders” may consume eggs to raise their LDL cholesterol, it is not very important since such consumption also increases HDL cholesterol, so the ratio between them does not vary , and if it varies it is minimally.

And I repeat again, approximately 75% of the population seems to experience little or no alteration in the plasma concentration of cholesterol after ingesting high amounts of cholesterol.

The evidence strongly suggests that the addition of eggs to the normal dietary intake of a wide variety of subjects does not adversely affect blood lipid profiles, which are risk factors for cardiovascular disease in multiple age ranges and ethnicity of apparently healthy individuals .

For example, some studies have shown that eating two eggs a day, in addition to the usual dietary intake, can increase the typical decrease in adiposity(accumulation or excess fat) observed with an energy deficit.

In turn, other studies have shown that a breakfast that includes one egg per day for five weeks decreases the concentrations of tumor necrosis factor alpha (TNFα) in adults with type II diabetes .

The egg yolks are a source of carotenoid xanthophyll bioavailable, specifically lutein and zeaxanthin.

A significant elevation in plasma carotenoid concentrations after egg ingestion has also been detected in relation to a cholesterol-free egg substitute.

The carotenoid xanthophyll have previously been shown to protect against inflammation, oxidation and atherosclerosis.

The potential mechanism by which eggs can promote cardiovascular health has been highlighted .

Although the definitive mechanisms of the possible cardioprotective effects of eggs are unclear, research increasingly suggests that egg consumption does not increase the risk of cardiovascular disease in healthy or sick individuals.

The insulin resistance is an independent predictor of coronary heart disease, hypertension and stroke , and can eventually lead to type II diabetes .

Insulin resistance is defined by the inability of the hormone , within its physiological range, to cause its effect on the target tissues (skeletal muscle, adipose tissue and liver).

The uptake of glucose is one of the main functions of insulin through its target tissues. Therefore, studying the metabolism of glucose allows a direct and indirect assessment of insulin resistance.

Considering the effect that hyperglycemia and insulin resistance have on cardiovascular disease, knowing the relationship between egg ingestion and glucose metabolism has also been investigated.

Overall, intervention investigations have not detected adverse glycemic or insulin responses when consuming one to three eggs a day in young healthy and obese populations.

As an example, in an investigation of approximately 4000 men and women from the Cardiovascular Health Study (1989-2007), egg consumption was not associated with the incidence of type II diabetes .

Still, future trials are needed to further clarify the relationship between egg ingestion and glucose metabolism.

Egg consumption does not increase the risk of stroke

In the United States, stroke is the fourth cause of mortality.

A higher risk of stroke has been reported in people with poor cardiovascular health , and is commonly associated with a suboptimal quality of diet.

Risk factors are classified as modifiable or non-modifiable , and diet is considered a modifiable risk factor.

Between 2009 and 2012, it was reported that more than 100 million American adults age 20 and older had hypercholesterolemia , which is an independent risk factor for stroke.

As mentioned above, some associations and organizations advise people with a higher risk of cardiovascular disease to avoid cholesterol consumption .

In addition, recent dietary guidelines for Americans advise individuals to consume as little cholesterol as possible in their diet , even though it appears to pose no health risk.

Therefore, it is essential to understand the relationship between egg intake and the risk of stroke.

To assess that possible association between egg consumption and stroke risk, one study analyzed data from the National Health and Nutrition Survey to evaluate a sample of more than 9,000 apparently healthy adults.

Well, the results indicated that the consumption of more than six eggs per weekdid not increase the risk of stroke.

Corroborating the previous findings, another study conducted a meta-analysis (higher scientific evidence) and determined that consuming one egg per day did not increase an individual’s risk of stroke.

Not everything is turned out, there are aspects that still need more research

Although the evidence seems clear that the egg is not the bad thing in the filmand it can have great benefits, future research is needed.

The effects of egg consumption on the risk of cardiovascular disease in individuals classified as “hyperresponders” should be considered , since this population has been identified but not studied exhaustively.

In addition, the expression of different genes (ABCG5 and ABCG8) has been associated with an individual’s ability to absorb cholesterol and may serve as an important objective to better understand the potential genetic influences on egg metabolism in the future.

Therefore, future studies of possible gene-egg interactions are warranted for these and other genes that have been shown to be involved in the management of cholesterol .

In addition, investigations are justified to determine the effects of egg consumption on the proteome to follow the hypothesis that eggs can provoke anti-inflammatory responses, since they are a concentrated source of xanthophyll carotenoids (discussed above).

The proteome, as information, is the set of proteins that an organism synthesizes from the genes it contains and that, for example, determines how organisms are, how your body works, how it behaves or the fight against infections.

Ultimately, to better understand the modulating effects of egg health, it is important to use a variety of approaches when designing future studies.

A more complete understanding of how eggs affect human health can guide nutrition professionals and the wider community.