The appeal of Cotswold stone

Cotswold stone has been popular in the area for centuries and is still in demand today. Its appeal lies in its characteristic colour, its impressive durability and its ability to be used for a wide variety of purposes. 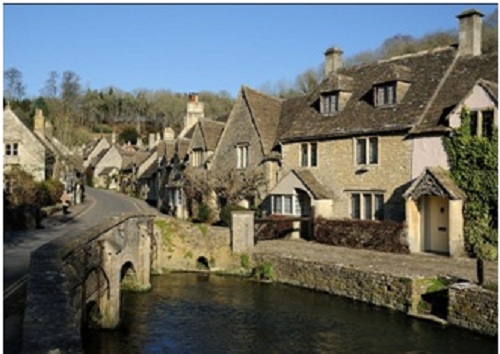 The characteristic colouring of Cotswold stone differs according to the area. Bath, for example, is renowned for its pearly white stone, whilst the central area is known for its golden tones. Meanwhile, the north east and northern areas boast honey-coloured stone that is some of the warmest looking around.

Visitors to the area cannot fail to notice the abundance of stone across the Cotswolds, ranging from buildings and walls that have stood for centuries to that which the local government website says is used to give new buildings “a special freshness” that then hardens and weathers over time.

JB Priestley, the popular 20th-century writer, was intrigued by the colour of Cotswold stone, saying that it seemed as if it could preserve sunlight even on the gloomiest of days.

The versatility of Cotswold stone

In the rural environment, drystone walls made of the Jurassic limestone that is Cotswold stone maintain an historical landscape for which the area is renowned. In towns and villages, the stone can be seen creating everything from traditional churches and chocolate box cottages to cutting-edge abodes behind automatic gates in Gloucestershire.

The stone, which helps to create a luminosity that is seldom achieved with other building materials, can be used for the creation of complete new homes, encompassing everything from property walls to exterior aspects such as traditional garden walls and those surrounding more modern automatic gates in Gloucester made by protonaccesscontrol.com and similar companies, to garden features and architectural decoration.

More details and pictures of the way in which the stone is used can be found on the Cotswolds Tourism Partnership website. There is certainly no shortage of images around of a region that has the most listed or protected buildings of anywhere else in the country.

There is no doubt, either, that Cotswold Stone continues to be one of the most popular building materials around, offering the ideal mix of aesthetic appeal and practicality. This is no small feat for an Oolitic limestone that was originally formed between 144 and 206 million years ago.