Windows 10 S vs Chrome OS, how they compare in services and applications

There are many questions that arise from this announcement, what exactly is Windows 10 S?, what can I do with this system that I can not do with another version of Windows 10 ?, and more importantly, what do not let me do ?. At the same time, let’s compare how Microsoft’s new system is planted against Chrome OS, in which users usually care more than anything: services and applications. 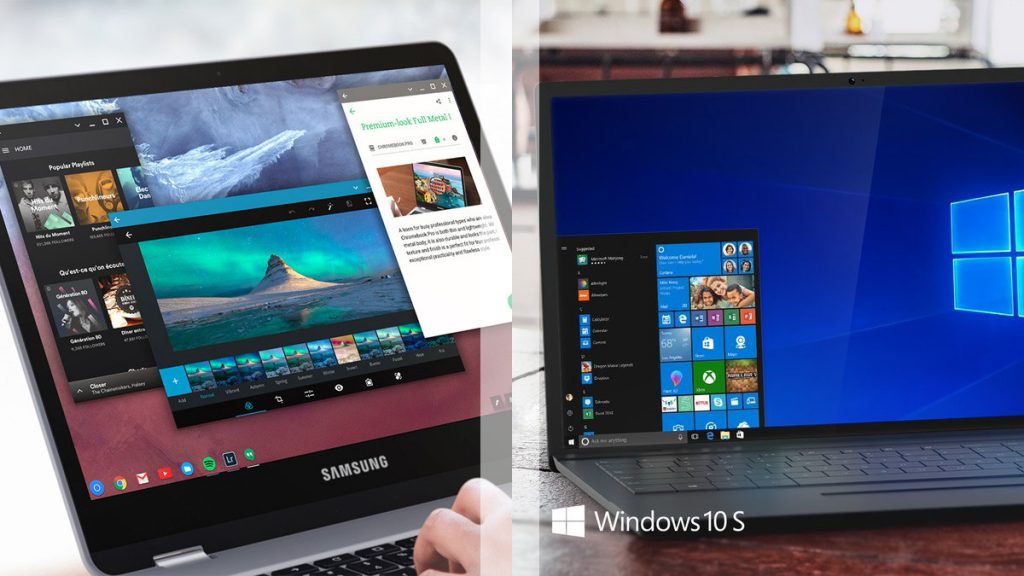 What is Windows 10 S and what are its limitations?

Windows 10 S according to the same Microsoft is a specific configuration of the same Windows 10 Pro that will offer an optimized experience for safety and performance. The ideal way for Redmond to achieve this has been to block the installation of applications outside the Windows Store, so they plan to prevent the user from installing malware consciously or unconsciously.

Depending on who you ask this is a good idea, a shield for users who pay less attention and a good layer of security. For others it is simply a sovereign stupidity, especially because with the Creators Update there is already the option to limit the installation of apps to those of the Store if desired, and reversibly.

The funny thing is that the closest thing to a defense of this decision is quite limiting for the user, is that yes, you can download another browser and run it in Windows 10 S, but as you guessed, it has to be in the Windows Store. Try searching Chrome, Firefox, Opera or anything similar in the Windows Store today and see what happens.

Also, suppose that one day one of these browsers or another alternative appears in the Windows Store. We could not assign it as main, which means that every time we click on a link from anywhere, it will open directly with Edge.

It could be argued that these limitations are good for an educational environment, because if it is the school that provides the equipment, the administration would want to maintain the greatest possible control over what is installed and what the students do. But the point is that with Windows 10 you can already set these limitations.

You can not help thinking that it really is only the benefit for Microsoft of selling equipment at very affordable prices with the condition that the user stays fairly enclosed within their ecosystem and look little outside.

We have not yet been able to officially test Windows 10 S, but if we take into account that it will be exactly the same Windows 10 as we already know but running only applications from the Store, we can infer that it will work quite fast and feel very light.

After all, if you currently take a laptop with very few resources, such as some of the cheapest hybrids that barely reach 200 euros, and you limit yourself to using only Modern apps, the performance is very good. Unfortunately, the number of applications in the Windows Store is still not particularly satisfactory.

This is where Chrome OS goes absolutely above Windows 10 S : applications available. Since Android apps reached Chromebooks, it was also no time to take the Google system more seriously.

Like anyone who likes, in the Play Store there are many more applications than in the Microsoft Store , which has not even reached Spotify (apparently will appear this summer). This includes other browsers. In addition, Chrome OS is basically Google Chrome made operating system, this means that you have the power of infinite web applications and extensions. Extensions that Microsoft Edge lacks enormously.

However, the Android applications in Chrome OS that you run will be the mobile version with its consequent discomfort when using it on a laptop. In addition, in Chrome OS as in Windows 10 S, you can not go to install apps outside of official stores, the difference is in the number of options, much higher in Chrome OS.

Both systems are designed to store little in local and depend on the cloud. The only difference is between Google Drive services and OneDrive services at Microsoft. That both in storage payment plans and in benefits are quite even.

The dependents of Microsoft Office will undoubtedly have a better option in Windows 10 S , since all the applications of the office suite will arrive at the Windows Store. App perfectly optimized for desktop computers and not for a smartphone or tablet. In addition, Office 365 will be free for one year for Windows 10 S users.

Depending on the perspective with which it is seen, the truth is that both systems are fairly even in what they offer, especially for the needs they seek to cover, they are not intended to be the work computer of a power user, but for students and schools that are looking for cheap machines to mainly access the web and edit documents.

Perhaps another section where Windows 10 S stands out the most is with its virtual assistant, Cortana. Google Now is evolving in Google Assistant, but Chromebooks do not have that feature yet.